Does one bottle make a real difference? 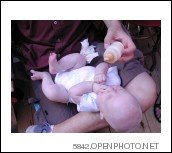 Marsha, a nurse and international certified lactation consultant wrote the following article and I wanted to share it- the italics are mine.

At many hospitals they will suggest and perhaps even almost demand that you offer your baby formula. This is probably a great article to print off and take with you to your labor. If it is suggested, perhaps you can help to spread the truth about one bottle of formula and the problems with receiving it.
Many people don’t realize that one bottle of formula can begin a series of problems… read more below:

*The gastrointestinal (GI) tract of a normal fetus is sterile

*The type of delivery has an effect on the development of the intestinal microbiota
…vaginally born infants are colonized with their mother’s bacteria
…cesarean born infants’ initial exposure is more likely to environmental microbes from the air, other infants, and the nursing staff which serves as vectors for transfer (this is one of the risks of a cesarean birth)

*Babies at highest risk of colonization by undesirable microbes or when transfer from maternal sources cannot occur are cesarean-delivered babies, preterm infants, full term infants requiring intensive care, or infants separated from their mother (again the reason why a vaginal, unmedicated (since it can lead to infant complications), non induced birth is ideal)

*Breastfed babies have a lower gut pH (acidic environment) of approximately 5.1-5.4 throughout the first six weeks that is dominated by bifidobacteria with reduced pathogenic (disease-causing) microbes such as E coli, bacteroides, clostridia, and streptococci (the colostrum and milk of the baby’s mom provide immune building protectants]

*Babies fed formula have a high gut pH of approximately 5.9-7.3 with a variety of putrefactive bacterial species

*In infants fed breast milk and formula supplements the mean pH is approximately 5.7-6.0 during the first four weeks, falling to 5.45 by the sixth week

*When formula supplements are given to breastfed babies during the first seven days of life, the production of a strongly acidic environment is delayed and its full potential may never be reached (formula dilutes the power of the immune building characteristics of breastmilk)

*Infants have a functionally immature and immunonaive gut at birth

*Open junctions and immaturity play a role in the acquisition of NEC, diarrheal disease, and allergy (one of the reasons for infants to be hospitalized early in life are due to diarrheal diseases)

*Mothers’ sIgA is antigen specific. The antibodies are targeted against pathogens in the baby’s immediate surroundings

*The mother synthesizes antibodies when she ingests, inhales, or otherwise comes in contact with a disease-causing microbe

*Once dietary supplementation begins, the bacterial profile of breastfed infants resembles that of formula-fed infants in which bifidobacteria are no longer dominant and the development of obligate anaerobic bacterial populations occurs (Mackie, Sghir, Gaskins, 1999)

*Relatively small amounts of formula supplementation of breastfed infants (one supplement per 24 hours) will result in shifts from a breastfed to a formula-fed gut flora pattern (Bullen, Tearle, Stewart, 1977) (so that little bottle due to borderline low blood sugar really does make a difference!)

*The introduction of solid food to the breastfed infant causes a major perturbation in the gut ecosystem, with a rapid rise in the number of enterobacteria and enterococci, followed by a progressive colonization by bacteroides, clostridia, and anaerobic streptococci (Stark & Lee, 1982) (a solid food is anything other than colostrum or breast milk)

*With the introduction of supplementary formula, the gut flora in a breastfed baby becomes almost indistinguishable from normal adult flora within 24 hours (Gerstley, Howell, Nagel, 1932)

*If breast milk were again given exclusively, it would take 2-4 weeks for the intestinal environment to return again to a state favoring the gram-positive flora (Brown & Bosworth, 1922; Gerstley, Howell, Nagel, 1932)

*In susceptible families, breastfed babies can be sensitized to cow’s milk protein by the giving of just one bottle, (inadvertent supplementation, unnecessary supplementation, or planned supplements), in the newborn nursery during the first three days of life (Host, Husby, Osterballe, 1988; Host, 1991)

*Infants at high risk of developing atopic disease has been calculated at 37% if one parent has atopic disease, 62-85% if both parents are affected and dependant on whether the parents have similar or dissimilar clinical disease, and those infants showing elevated levels of IgE in cord blood irrespective of family history (Chandra, 2000)

*In breastfed infants at risk, hypoallergenic formulas can be used to supplement breastfeeding; solid foods should not be introduced until 6 months of age, dairy products delayed until 1 year of age, and the mother should consider eliminating peanuts, tree nuts, cow’s milk, eggs, and fish from her diet (AAP, 2000)

*Ihe avoidance of cow’s milk protein for the first several months of life may reduce the later development of IDDM or delay its onset in susceptible individuals (AAP, 1994)

There are no upcoming events at this time.
View All